NEWS  Most news items are for members only.
Please LOGIN to see those.

We are aware of a number of members using Microsoft email addresses, especially Hotmail, that have been hacked.  If you are one of these, we will try to reach you by Whatsapp or phone.  We may also suspend newsletters to you but the damage will already have been done.

We recommend that you should always change your passwords regularly, at least every 3 months, and always use a very secure one.

If you cannot access your email it is likely that the hacker has changed your password, so first please contact Microsoft directly to complain (good luck with that!), then create a new account elsewhere and then use our secure contact page to let us know your new address.

You will still be able to see the news by logging into our site, where you should also look at "My Details" and let us know of any changes needed.

If you have a Yahoo account, they recently changed their terms so if you do not login to your account for 6 months, it will be deactivated. 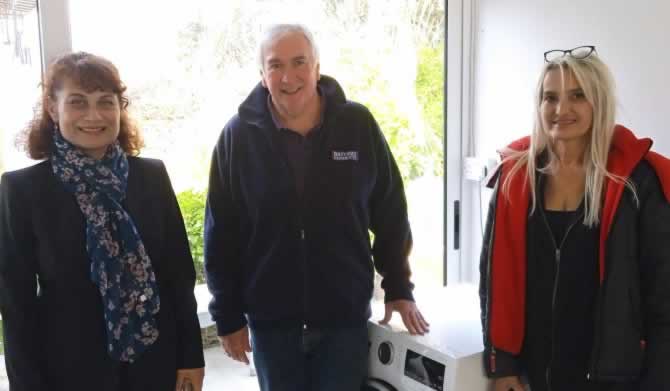 Elderly Care & Home Care continue to be an issue in Northern Cyprus, especially for the Expat Community.

The plight of a Famagusta care home was bought to the attention of the British Residents Society by The Association of Elderly Rights & Mental Health.

The 'Ay Isigi Bakim Evi' Home was in desperate need of a washing machine as theirs had recently broken and non-repairable. The BRS were happy to donate a new washing machine so that they could continue to do their cleaning within the home.

The pictures show the Chair of the Association of Elderly Rights & Mental Health, Hatice Jenkins, the Care Home Owner Mrs Biray Senyigit and Julian Mawdesley from the BRS.

The BRS are also arranging the purchase of 300 disposable mattress protectors to be distributed throughout the care homes. 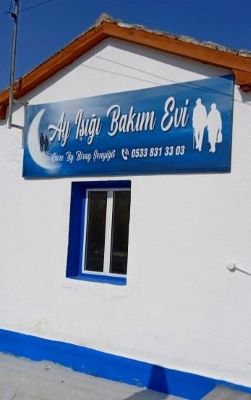 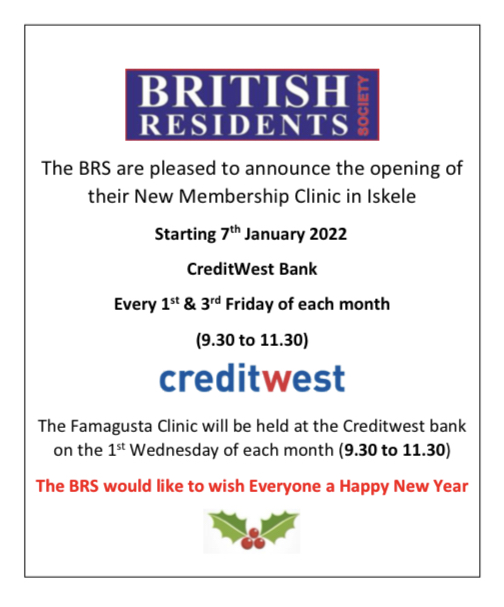 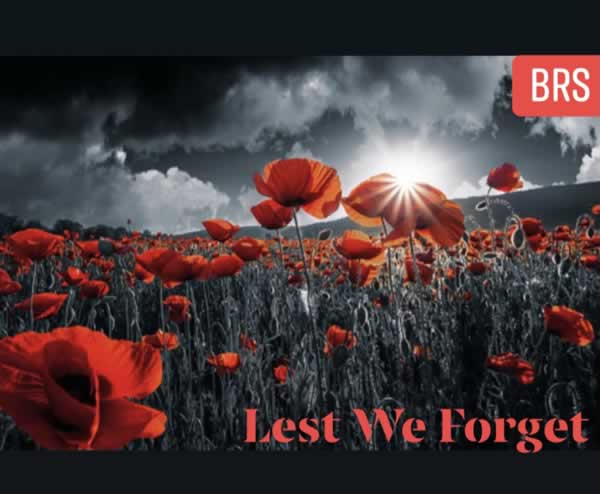 On Behalf of the British Residents Society. 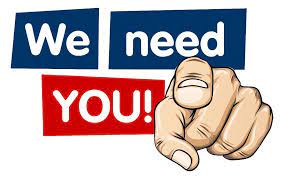 The BRS wishes to expand the services that it would like to offer at it's various Membership Clinics, particularly in the Famagusta, Iskele & Bogaz areas.

Membership Clinics are held at various locations, usually for no more than two hours at a time, twice a month, mainly at branches of CreditWest Bank.

There is no minimum requirement to run a set number of membership clinics in any month.

If you would like to volunteer to assist with the smooth running of membership clinics, be trained on the BRS Membership database, to process membership renewals and new member applications, while the clinic is in operation acting as a conduit for individual membership enquiries. 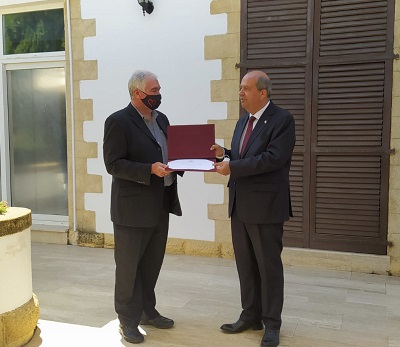 This week the British Residents Society were invited to the TRNC Presidency building on National Blood Donation Day to receive a certificate of appreciation from President Tatar for the work undertaken on organising blood donor days at the State Hospital.

The certificate was received by Julian Mawdesley, the BRS Health & Welfare Secretary.  Mr Tatar thanked the British expats, not only for their blood donations but for their continued support of the TRNC and community spirit.

Julian said this award was received on behalf of the BRS donor team past and present who give their time freely to organise and help run the donor days.

After the ceremony a tour was arranged of one of the fully equipped mobile blood donation units by the North Cyprus Red Crescent Society.

Further photographs and information will appear on the BRS website Health page soon. 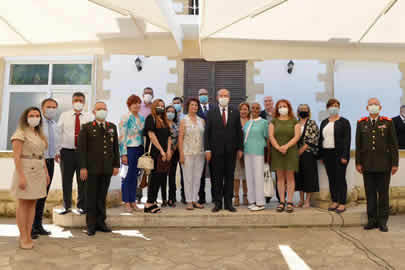 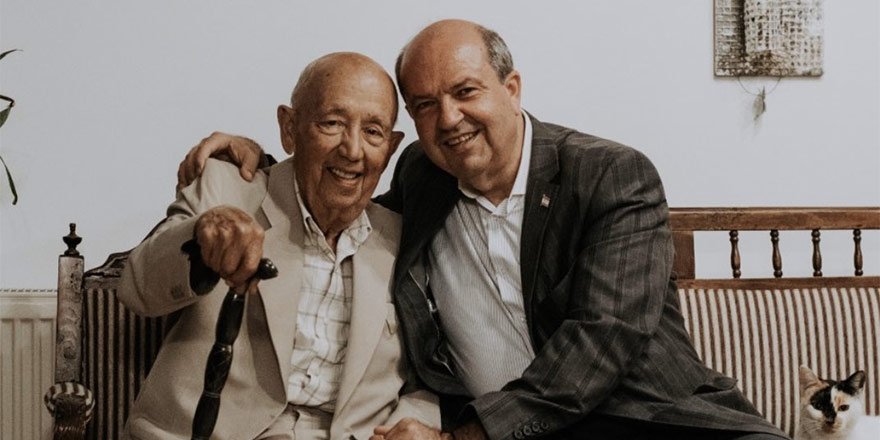 It was with much sadness that we learnt yesterday of the passing of Rustem Tatar, the father of the President, Ersin Tatar.

We would like to take this opportunity to offer the heartfelt condolences from both the Committee and Members of the British Residents' Society to Mr Tatar and his family at this sad time.

The new Covid-19 Vaccination Call Center has been launched today, for residents who have been unable to register for vaccination Appointments via the online application, that was launched recently.

This number will be available Monday through to Fridays, during normal government working hours.

The Call Center can handle 5 calls simultaneously with a further 10 calls queuing. Calls made in either English or Turkish languages can be handled. 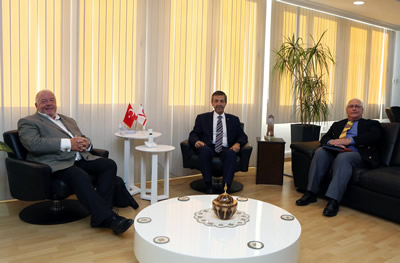 Peter Wilkins and Mike Diplock met with the TRNC Foreign Minister Mr Tahsin Ertugruloglu recently and took the opportunity to welcome Mr Ertugruloglu back into the same Ministerial position that he had occupied previously.

A discussion then followed which consisted of the following items,

1. Difficulties being experienced by Property Owners and Residency Permit holders, who found themselves outside of the TRNC, without the appropriate documentation to return, yet had complied with all of the procedures necessary to ensure that they held the correct status to reside in the TRNC.

Minister Ertugruloglu agreed that this was an area that needed looking into, and would be looking into the feasibility, of having some sort of verification procedure, where a traveller’s eligibility to return to the TRNC could be checked electronically, rather than having to produce documentation.

2. Repeating a meet, the government ministries opportunity, similar to that held in 2018 at the Acapulco Hotel for BRS members to meet with ask questions and raise concerns with senior officials across a number of different Ministries, that have an impact on an Ex-Pats life in the TRNC.

Minister Ertugruloglu who had previously been instrumental in the setting up of the previous event, agreed that this should be looked at.

3. Allowing all Ex-Pats who are Property Owners, holding Residency Permits to have an entitlement to vote in local elections.

Minister Ertugruloglu felt very strongly that it was essential that ex-pats were given this entitlement and agreed that he would give this proposal his fullest support.

4. Minister Ertugruloglu brought to our attention information that had come into his possession, that outlines potential changes that are being implemented, specifically for holders of third part national passports, i.e., British Passport holders, when crossing into the TRNC from the Republic of Cyprus, when using either of the two border crossing points that are located within the British Sovereign Base areas.

While the changes that were highlighted are due for implementation on the 1st of April, this is currently negated by the inability to fly into the Republic of Cyprus, to return to the TRNC, until possibly the 1st of May at the earliest.

Following receipt of the details of the changes, we have immediately requested a meeting with the British High Commissioner and are expecting to meet with him w/c 22nd March, to discuss the situation with him further. We will report back on that meeting as soon as it has taken place.

President Ersin Tatar stated that he values expats living in the TRNC because he appreciates their love and support in this country, and has emphasised that a fresh approach can be taken in relation to direct trade and travel between the TRNC and the UK, following the conclusion of the Brexit transition process on January 1, 2021.

The President made the remarks during a virtual meeting which was hosted by the Presidency on Friday evening, with British Residents’ Society (BRS) Chairman Peter Wilkins, Deputy Chairman Mike Diplock and Presidential Foreign Press officer Kerem Haser as the participants.

“I do not see our expat residents as being any different to the citizens of this country, because I know how passionately they love and support the TRNC,” President Tatar said.

The President said that during the discussions with Mr Raab, he had made specific references to the 10,000-plus expats living in the TRNC – although he said the number of British subjects was much higher - as well as the 300,000-plus Turkish Cypriots living in the UK, when explaining the inhumane isolation and its negative impacts on the country.

He said he wanted to exchange views with BRS officials following his “excellent meeting” with Mr Raab “which was held in a sincere and cordial atmosphere.”

President Tatar said that he had asked Mr Raab to look into the prospect of the UK forwarding Turkish Cypriots their share of the Oxford-AstraZeneca vaccine, so that it could be used for the benefit of expats living in the TRNC. He said Mr Raab had reciprocated by stating that he would give instructions to the relevant authorities to look into the matter.

The President added: “Turkish Cypriots are also endeavouring to acquire vaccines. Motherland Turkey has so far given the TRNC a total of 40,000 dosages of the vaccine, which means that a total of 20,000 people will be inoculated as there is a requirement for each person to have two shots. . .the EU has also sent us some vaccine dosages which are not enough as we actually  need   at least 500,000 dosages.”

Indicating that he appreciates the concerns of the BRS officials over the ‘lack of clarity’ relating to a vaccination programme, the President stated that this is due to the fact that “we still have not had enough vaccines dosages imported to the TRNC. We are doing everything we can to speed up the process and are exploring all avenues to get more vaccine dosages to the country, to benefit all residents.”

Stating that it was the first time Mr Raab has visited Cyprus, the President said that he visited both sides of the island, as a five-plus-UN informal meeting is being planned to be held in March that would be attended by the Turkish and Greek Cypriot sides and the three guarantor states – Turkey, Greece and the UK. Mr Tatar stated that he intends to put forward a new vision “for peace and stability for a sustainable settlement on the island that is based on sovereign equality and the existence of two States that coexist side-by-side which are in cooperation with each other”.

He said he had shown photographs of North Cyprus to Mr Raab showing the substantial investments and developments and asked: “How can all of this be undone? The TRNC is as sovereign as the State in the South, because we have all the attributes of a State, from having our elections and laws, to having our own territory, population and state organs.”

President Tatar said he explained to Mr Raab that countless negotiations to achieve a settlement based on a federal model failed time after time over half-a-century, “because of the hegemonic mentality of the Greek Cypriot side in not wanting to share power and the natural resources of the island with the Turkish Cypriots – who are in fact a sovereign people and co-owners with a right to self-determination” and reiterated that “we will insist on the survival of our State.”

President Tatar stated that they had also discussed the completion of Brexit during the meeting. “I stated my conviction that the UK can take a fresh approach to direct trade and direct flights with the TRNC because it is not bound by the rules of the EU,” he said.

The disembarkation issue for passengers travelling from Ercan airport to the UK during their touch down in Turkey was also discussed between the two officials which President Tatar said was a priority. President Tatar said that he had asked for the British official to look into how this could be reversed back to the old system where passengers could remain in the aircraft without having to undergo a re-screening procedure. Mr Tatar said he had advised Mr Raab that they have reports which showed that Ercan airport complied with international standards and is suitable like any other airport. He said Mr Raab promised to look into this issue.